A book about artist, filmmaker, painter and author Derek Jarman

A book about Derek Jarman 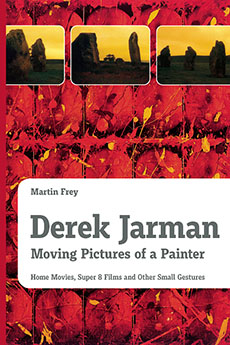 The English painter, film-maker and writer Derek Jarman (1942–1994) is mainly known for his work in the medium of film, but he always saw himself primarily as a painter.

In this study of his lesser known home movies, Super 8 films and the ‘cinema of small gestures’ that Jarman developed out of them, Martin Frey discusses numerous Super 8 films as well as the films The Last of England, In the Shadow of the Sun and The Angelic Conversation. He examines Jarman’s filming techniques and way of working and also analyses influences from the fields of painting and literature, such as Allen Ginsberg, Robert Rauschenberg, David Hockney and Yves Klein.

For Jarman, life and work represented an indivisible unity. Numerous autobiographical elements from his works are thus considered in this volume: his repressed childhood and adolescence in post-war England, his coming out and the liberated life of the seventies, his struggle against the unequal treatment of homosexuals during the Thatcher era, his dealing with his own HIV infection and finally his personal commitment to fighting discrimination against people who are HIV-positive or who have already developed Aids.

Theme by Anders Noren — Up ↑